Here’s the facts of Johnson v. M’Intosh. Throughout 1773 and 1775, private individuals like Johnson (Plaintiff) bought land of Indian tribal leaders. (Illinois and Piankeshaw Nations) Johnson wanted title to the lands recognized by the USA government. However, individuals like M’Intosh (Defendant) bought the same land from the govt. Johnson and M’Intosh took their fight to the Supreme Court of the USA.

Now, here’s the issue of the case: Do Indian tribes have title to the land, and can they sell that title to private individuals, which the govt must recognize in the courts of the United States?

The rule of this case is clear: Under the doctrine of discovery and conquest, the title to the land belongs to the conquering nation; moreover, the natives can only occupy the land.

In this case, Chief Justice John Marshall applied natural law principles. Marshall said nations that find land get to keep it. Also, he said nations that conquer other nations get to keep their land. At this time, no positive law or US statutes existed in the USA; however, the USA would later adopt British property law.

Surprisingly, the great Chief Justice John Marshall was racist in this case. He said Native Americans are heathens, savages, uncivilized, and lack Christianity. Moreover, he said Natives weren’t competent or smart enough to engage in a contracting of property. Basically, Marshall said Natives were like minors (small children) and lack competency. As for being a racist, Marshall made it a pattern of being racist against minorities throughout his career.

Incidentally, property rights were not extended to Native Americans, although existing for hundred of years in Europe. Natives could not own estates like Fee Simple, Life Estates, Fee Simple Determinable, Fee Simple Subject to Condition Subsequent, Fee Simple Subject to An Executory Limitation, Joint Tenancy, Tenancy In Common, and Tenancy In Entirely. This was done to justify an illegal taking of property of Native lands for western expansion, which is evident in the Trail Of Tears.

Ironically, Native Americans did have their own system of “property rights”. Natives marked their territories by marking the trees to indicate tribes in a territory. Harold Demsetz outlines this property system in his article titled “Toward a Theory of Property Rights”.

Today, Native American legal status is unique in the USA. As a legal matter, Natives are independent sovereign nations with their own jurisdiction, laws, courts, representation, and government. Under the law, Native Americans are recognized as sui generis.

In summary, this case said Native Americans did not own the land; therefore, they cannot sell it. That being said, the great John Marshall still gets veneration from people; although, he’s a racist. Further, he didn’t create judicial review so he’s unworthy. 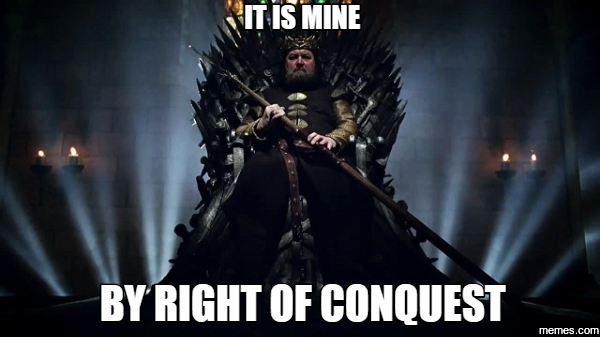