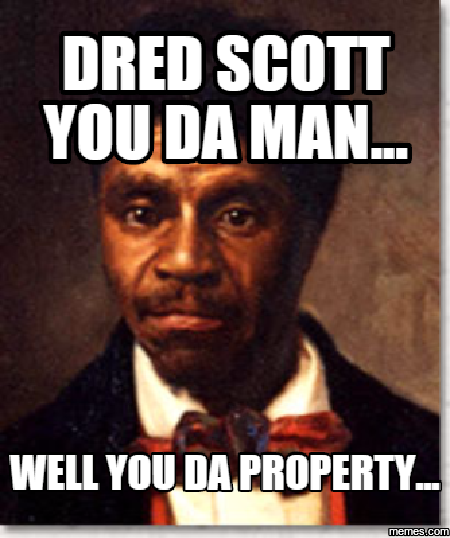 While being one of the worst constitutional law cases of all time, Dred Scott v. Sanford (1857) said slaves were not US citizens.

The Dred Scott v. Sanford facts are easy. Dred Scott (Plaintiff) lived in Missouri, and he sued for his freedom under the Missouri Compromise. Sanford (Defendant) owned Dred Scott as a slave.

Initially, here’s the issue in the Dred Scott case: Are slaves citizens under the United States Constitution?

Additionally, here’s the rule: The United States Supreme Court ruled slaves are not citizens under the Constitution.

The Supreme Court of the United held the following in this case. First, Dred Scott has no standing, and Africans are not citizens within the meaning of the US Constitution. Second, though strange, the Property Clause only applies to lands possessed at the time of ratification; that is, Congress cannot ban slavery in the territories, and the US Supreme Court rules the Missouri Compromise unconstitutional. Third, the Fifth Amendment’s Due Process Clause prevents the federal government from freeing slaves brought into federal territories. Basically, the Supreme Court reversed judgement and dismissed this case for lack of jurisdiction.

After the civil war, slaves owners wanted to be compensated for lost property (ie. slaves) under the Fifth Amendment. Therefore, the Radical Republicans added Section 4 to the Constitution to deal with this problem: “But neither the United States nor any State shall assume or pay any debt or obligation incurred in aid of insurrection or rebellion against the United States, or any claim for the loss or emancipation of any slave; but all such debts, obligations and claims shall be held illegal and void.” This section voided any Fifth Amendment property claims brought by slaves owners for compensation of lost property.

At heart, Dred Scott was a diversity case. The case said Dred Scott wasn’t a citizen within the meaning of the US Constitution. Therefore, he could not bring a lawsuit for lack of jurisdiction. Essentially, it was a civil procedure case.

Ultimately, the Dred Scott decision led to the civil war. Lincoln said this decision was wrong and the people should not follow it. Just days after Lincoln was elected as president, shots were fired at Fort Sumter and the civil war started. It took the decision of Grant v. Lee to end slavery and the civil war.