Whole Woman’s Health v. Hellerstedt (2016) is the third in a trilogy of cases on abortion jurisprudence.

Here’s the facts of this case. The Texas legislature passed House bill 2: It had two provisions, which said doctors must have admitting privileges at a nearby hospital to perform an abortion, and abortion clinics must have standards of an ambulatory surgical center. The plaintiffs, a group of abortion providers, sued and argued equal protection of the law under the Fourteenth Amendment was denied when getting an abortion.

The Supreme Court had to answer the following issue in Whole Woman’s Health v. Hellerstedt: Should the undue burden test deal take into account the extent to which laws that restrict abortion serve the government’s interest in promoting health?

The holding of Whole Woman’s Health v. Hellerstedt is straightforward to digest. The Supreme Court said an undue burden to abortion constitutes 1) doctor’s admitting privileges at a nearby hospital and 2) abortion clinic having surgical center requirments; therefore, these provision of the H. B. 2 violate the constitution.

Interestingly, in the news, Supreme Court nominee Neil Gorsuch was asked about the issue of abortion at confirmation hearings. The Senate grilled him about Griswald v. Connecticut over and over. Although he never had a case on abortion, Gorsuch said he’ll follow the law. With Anthony Kennedy soon retiring, it will be interesting to see if newly appointed Supreme Court Justice Gorsuch will vote to overturn abortion.

In the past, Roe v. Wade (1973) said women have a right to abortion. Roe provided a trimester framework for abortion. Basically, in the first three months of pregnancy, a women can get an abortion with a doctor’s consent. However, after the first trimester, the state has an interest in women’s health and can restrict abortions.

Next, Planned Parenthood v. Casey (1992) affirmed Roe but only in name. It got rid of the trimester framework and replaced it with a viability framework. Basically, pre-viability said a woman can get an abortion if there’s no undue burden. Post-viability said the state can restrict abortions for a women’s health reasons and to protect the life of fetus. Casey narrowed the right to abortion.

In the end, Whole Woman’s Health v. Hellerstedt dealt with the “undue burden” part of abortion, which the Roe and Casey didn’t answer. The Supreme Court said House Bill 2 imposes an undue burden on women seeking a legal abortion, and thus is unconstitutional. Whole Woman’s Health v. Hellerstedt makes the third case in the trilogy on abortion jurisprudence. 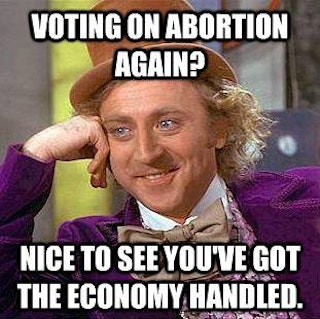