The facts of Snyder v. Phelps are simple. Deceased Marine Matthew Snyder’s family filed a lawsuit against the Westboro Baptist Church who protested his funeral. Snyder’s family charged defamation, invasion of privacy, and the tort of intentional infliction of emotional distress, had be committed at the funeral. Initially, the family got a 5 million judgement, but the Appeals for the Fourth Circuit said the First Amendment was violated. The Fourth Circuit said the church member’ speech is protected even if “repugnant”.

Snyder v. Phelps put the following question to the Supreme Court: Does the First Amendment protect protestors’ speech at a funeral for inflicting suffering on the family of the dead?

The case made national news headlines. News casts showed the Westboro Church picketing with signs that read “Thank God for dead soldiers” and “Fag troops”. These demostrations made news across the United States.

Ironically, Fred Phelps’ daughter, Shirley Phelps argued the case. By all accounts of those at court, she was a terrible attorney who made horrible arguments. The Supreme Court ruled on their own. 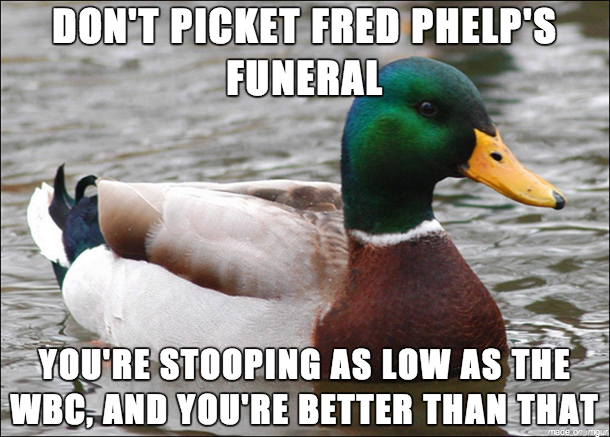