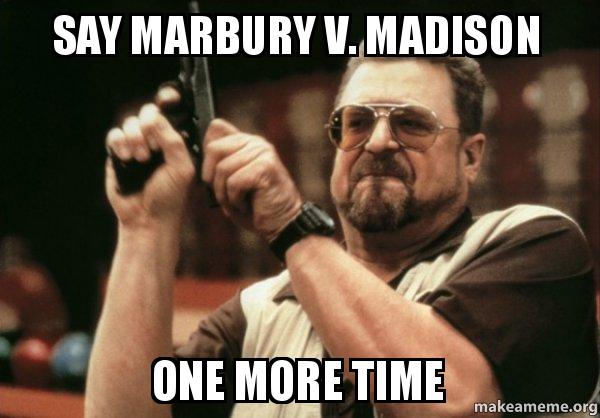 Marbury v. Madison from 1803 is a canonical case in law. Indeed, it’s a foundational case of law. All law students must learn it.

Accordingly, Marbury v. Madison addressed a number of legal points. First, does Marbury have a right to his commission? Second, does Marbury have a remedy under the laws of this country? Finally, can the Supreme Court issue a writ of mandamus? The Supreme Court would set precedent in law and establish separation of powers, which is the division of power of the three branches of government.

Also, what did judicial power mean in the constitution? Article three section one states: “The judicial Power of the United States, shall be vested in one supreme Court, and in such inferior Courts as the Congress may from time to time ordain and establish.” The case addressed this question.

Nevertheless, the constitution did not define judicial power. There is no definition for this provision. In fact, the constitution is silent on this doctrine. Therefore, the meaning of these words are open to interpretation.

That being said, Marbury v. Madison established judicial review. Supreme court justice John Marshall states: “It is emphatically the province and duty of the judicial department to say what the law is.”

However, schools teach John Marshall in Marbury v. Madison created judicial review, which is untrue. Yes, Marshall was not the first to establish judicial review. In fact, founder Alexander Hamilton wrote about judicial review in Federalist No. 78. Also, the British courts reviewed statutes for centuries.

Notably, John Marshall was a scoundrel in this case. As most lawyers know about civil procedure, Marshall did not have subject matter jurisdiction to hear Marbury v. Madison. In fact, he should of recused from the case because he started this whole mess by not giving Marbury his commission.

In 2018, the Supreme Court joked about the relevance of the Marbary case in Dalmazzi v. United States. With laughter echoing throughout the whole Supreme Court, Chief Justice Kennedy asked Counsel this question about Marbary, “Do you think Marbury versus Madison is right?” Also, Justice Kagan said, “You’re not pointing to anything in Article III, is that correct? You’re pointing instead to Marbury and saying that the principle derives from there, but I could look at Marbury and say: You know, what — what Chief Justice Marshall was talking about was James Madison handing around commissions, nothing to do with criminal prosecutions.” When it came to a correct interpretation of the Constitution, the Court, including legal community members, didn’t agree with Chief Justice John Marshall’s interpretation of the Constitution and limited Marbary to just the facts.

In conclusion, all law schools teach Marbury v. Madison to second year law students. The case sets the stage for Courts to review statutes passed by Congress. Also, it answers one important question: Why do people listen to courts? To this day, law students have difficulty understanding this case.