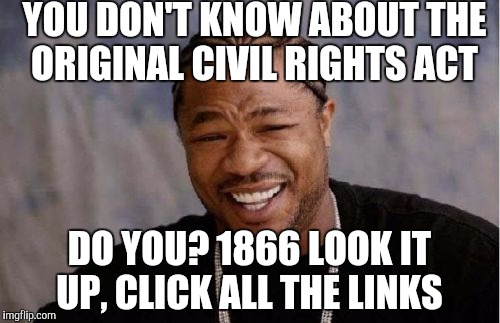 When it comes to racial discrimination cases, the Civil Rights Cases (1883) said the 14th Amendment only applies to state actors and private businesses can discriminate against African Americans.

To start, here’s the facts of the Civil Rights cases. In a series of five separate cases, African Americans weren’t allowed access to theaters, cabs, cars, and inns based on their skin color. Further, African Americans argued a federal law in 1875 gave all people in the United States the right of equal treatment. Initially, these African Americans prevailed under the Act in lower court; however, the defendants appealed to the Supreme Court arguing this Act was an unconstitutional use of Congressional power as outlined in the Thirteenth and Fourteenth amendments.

This case presented the following issue to the Supreme Court: Did the Civil Rights Act of 1875 violate the 10th Amendment of the Constitution?

Notably, this was a criminal case. In these cases, private business owners could of went to jail. Basically, if you didn’t admit someone to the movie theater or your business, you risked jail time. The 1800s had strong anti-discrimination laws.

Originally, the Civil Rights Act of 1866 applied to government. The government could not discriminate. Later, this act was expanded.

As time passed, the Civil Rights act of 1875 was amended to include private businesses. However, the Act was not followed. The Civil Rights cases headed to court.