In this scene, Sid and Nancy talk about their fatal “promise” while Nancy plays with the knife. They planned to die together, and they would do it by overdosing on drugs. They called these drugs “The farewell drugs”. Together, they formed a suicide pact. However, things weren’t going to plan- or maybe they were.

Nancy was Sid’s only friend. She told him, “I’m your best friend. And you’ll never get straight. And you say that every fucking day. ‘I can’t get up tomorrow. I can’t do it anymore. Oh God, please help me'”. She stuck by him in the end.

Basically, Nancy wanted Sid’s help, although it’s not what you think. She said, “You’re so fucking weak and stupid…Go on. Just leave me. Sid, you don’t even know when someone cares about you”. She wanted his help to die.

Finally, Sid stabbed Nancy. She fought back. Later, she bled to death in their bathroom while Sid slept in their bed. 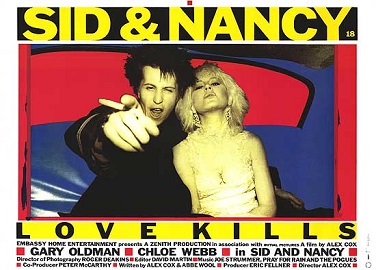