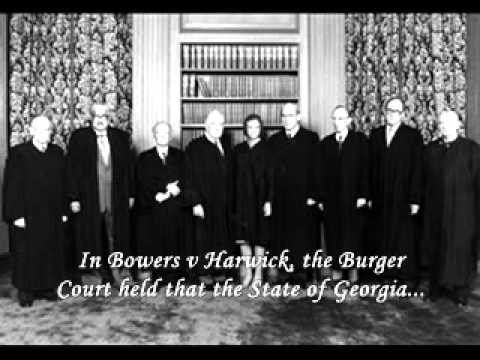 When it came to a state sodomy ban, Bowers v. Hardwick (1986) said it was constitutional.

Basically, here’s the facts of Bower v. Hardwick. The police charged Micheal Hardwick and his boyfriend with sodomy. The scene of the crime was Hardwick’s Georgia apartment.

Now, here’s the issue: Is an act of consensual homosexual sodomy protected under the Constitution?

The Supreme Court provided this rule in the Bowers case. The US Supreme Court said there is no constitution protection for sodomy; therefore, states can ban sodomy.

Also, Justice White discussed the issue of judge made constitutional law. While sounding a lot like Lochner, Justice White didn’t think the Supreme Court should sit as a super legislature. In such a situation, a Court decides a case instead of deferring to the democratic process. The court should defer to the state.

Furthermore, Justice White discussed the slippery slope of sex laws. He said: “And if respondent’s submission is limited to the voluntary sexual conduct between consenting adults, it would be difficult, except by fiat, to limit the claimed right to homosexual conduct while leaving exposed to prosecution adultery, incest, and other sexual crimes even though they are committed in the home. We are unwilling to start down that road.” Basically, the court wanted to make a narrow ruling in this case, and it didn’t want to open up the door to other sex crimes.

In dissent, Justice Steven discussed the sodomy ban on traditional marriage couples. He said, ‘Do you think it would be constitutional or unconstitutional to apply it to a married couple?” Here, Stevens wonders if the sodomny ban would cover married couples in the privacy of their home.

In summary, Bower v. Hardwick said state sodomy bans were legal under the Constitution. Under the state police power, states could pass sodomy bans to protect the health, safety, welfare, and morals of their people. Eventually, Lawrence v. Texas would overturn some state sodomy bans.